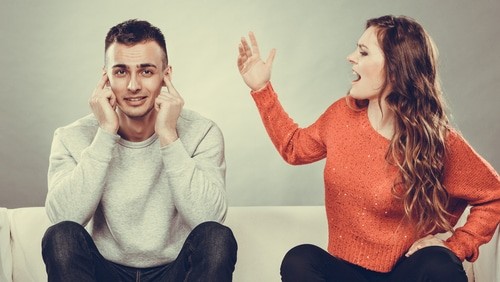 “You’re a selfish, self-centered, arrogant, son-of-a-bitch.” These are words I’d heard from my ex-wife randomly throughout our 34 year marriage, particularly when she was ticked off at me. Nine times out of ten I’d blow it off as being more her problem than mine. Nothing but barbs thrown trying to hit a vulnerability bullseye.

It’s been well over 3 years since my divorce and now, with additional time and wisdom under my belt, I’m discovering that she was right all along. I’m not proud, happy, or or at peace with this fact. In fact I’m damn angry about it; not in the fact that she was right, but more in the fact that it seems to be an integral core of my being – something that’s existed a long time.

And I’ve been too friggin blind, delusional, and in denial to truly see it.

Worse yet, I don’t know how to fundamentally change it.

When I overhauled my life years ago and started Thrive After Fifty, I had the very unselfish goal of trying to help others rediscover themselves as I had. For many decades I did what I was taught I needed to do: work hard, provide for my family, do what ever I could do to make my family’s lives easier and happier, put my four children through college, and be the best spouse I could be.

Often, I felt I had compromised my life for others, when in truth I never had the balls to follow or define my dreams. I never thought I had any; nothing that made me special, unique, or suited for great success. My path was unknown and elusive; fear was a controlling factor. Besides, I was proud and manly, never wanting to admit or show I could be weak, unknowing, timid, or incapable of taking control of my life.

Thrive After Fifty would change all that. I would battle my demons, let my true authentic self emerge and grow, use my imagination to create the biggest dream I could, work diligently to make it come true, and step out of my “box” like I’d never done before. I’d become the best person I could be by helping others, reach out and open other’s eyes to the great innate abilities and powers that we all have, and set an example of how to live a successful and fulfilling life to the most important people in my life – my children.

I’ve been dating Lezlie for just over 3 years. I’ve know and have vocalized to her in the past that I believe she’s a much better person than I am. Kinder, more caring, unselfish, willing to help others out… all-in-all just a nicer person than I.

Obviously, I’m not quite the jackass I make myself out to be. Otherwise such a great person would not hang in there and waste her time on such a lost cause. I believe I still have hope … or at least I’d like to think I do.

But the last few days has astounded even me. I’ve been disrespectful, inconsiderate, demanding, arrogant and, overall, a big A-hole. And that’s with a capital A.

I can try to make excuses but that’s just what they are…nothing but excuses.

No camera, no computer, no cell phone… all stolen in Costa Rica. Maybe these have contributed to my behavior, maybe they haven’t. How about the gorgeous, rock-hard, tight-bodied women 40 years younger than I competing in beach volleyball at a 3-day Central American tournament that’s going on in Nicaragua? Well, maybe. I must say I’ve had my share of silent internal drooling and admiration going on while watching. I can’t say I’ve been much of a conversationalist with Lezlie during the matches.

And then there was the picture. Yes, the picture. The one taken of, whats her name?… oh yes – Karen. A tall, slender, 30-year old drop-dead beauty in a sexy bikini from Alberta who joined our table of 5 guys and Lezlie as we sat drinking more than what we probably should have at the beachside bar. All of us drinking, gabbing, and partying while overlooking the surf and beautiful beaches of San Juan Del Sur.

Hey, come on, give me a break. After all there were group pictures being taken at the end of the party. I suppose it didn’t go over too well that Karen happened to end up next to me and Lezlie was the one taking the picture with someone else’s camera.

Having my arm around her very shapely waist probably didn’t help the situation either.

Think that’s bad enough? It gets worse. This one I’ve tried to blame on the alcohol, but it’s still just an excuse. I knew what was really going on…

The picture taking is finished and everyone starts saying their final goodbyes. But no pictures were taken with our camera! So what do I do? Like an uncaring, obnoxious, inconsiderate fool that I can be, I ask Lezlie for her camera and proceed to take a picture of tall, beautiful Karen in her sexy bathing suit.

I honestly didn’t know the cell phone was set on video. I really, really didn’t.

Needless to say, my chances on getting lucky that night disappeared. In fact, chances were good that I might never get lucky again…

She overreacted, right? It was nothing except a friendly picture, er video, of a fun afternoon, right? No harm. Perfectly understandable??

That walk home that night, by myself, found the studio apartment door locked. It only took about 15 minutes before she let me in. Then, she wanted to talk about it, the last thing I wanted to do!

Yes, I can be a real jerk. Insensitive, selfish, and uncaring. It only took 24 hours or so for me to finally get totally honest with myself and see the errors of my way. Yes, some of us are slow learners.

My final wake-up call came the following night, Valentines Day, 2015. After a wonderful meal and a couple of drinks on the 2nd floor deck overlooking the ocean – never mind the two hot chicks in the red mini dresses sitting just below us – Lezlie needed to get WiFi to get us a cab home. We couldn’t connect and Lezlie, thinking that she may have too many open tabs on her phone, decided to close them down.

Yes, you guessed it. The picture, er video, that had been erased the day before was still there! And she had the audacity, the gumption, the insensitivity, to close it out right in front of me…forever!

I didn’t even have the opportunity to see it!

Stupidly, I threw out a couple of choice words at her in retribution. Unsurprisingly, the walk home that night was very uncomfortable, strained, and quiet. The talk we had once we returned wasn’t nearly as quiet.

Integrity. It’s one of those values that I found myself short on in my earlier years that I committed to making a part of my new self. That night I admitted to Lezlie, and myself, that I’d been acting out of integrity. As hard as it was, I came clean on my shortcomings: my irrational behavior, my temptations, my unforgivable disrespect, my struggles, and how I wished to be a better person.

Sometimes it’s damn difficult to admit one’s shortcomings. Admitting that I’d been, and was being, an insensitive, selfish, self-centered, arrogant son-of-a-bitch, wasn’t easy to hear myself say, but that was the truth.

I also knew I had to do something about it. I had been like this for way too long in life.

The Gift, The Stretch

As I write this, I have tears in my eyes. I so much wish to change this about myself. I know I need to stop looking for instant gratification, viewing things in terms of “what’s in it for me?”, and having the narrow, short-sighted view that life should revolve around me. I know better, and have always known better, but I’ve never been able to internalize it or make it a foundational part of who I am.

I’ve got to change this about myself. In fact, I’m going to change this. I’ve been this way long enough. If I’m truly sincere about becoming a better person then I need to take action unlike anything I’ve done before. In everything there is a gift. The gift in this for me is that I’m going to commit myself to making this change a reality.

The following is the action steps I commit to doing:

– I commit to doing something unselfishly everyday for the next 30 days to help or benefit others. Why 30 days? Because I know it takes anywhere from 21 to 28 days to create a habit. I believe that similar to exercising, reading daily, or any other beneficial character trait, creating a habit takes dedication, personal commitment, and a measurable action plan.

– I commit to journaling daily the deeds I do.

As a person who, for the most part, has only thought of himself, this will be a great challenge and test outside of my comfort zone. Fortunately, or unfortunately, I can be a committed and determined SOB. It ought to be interesting and enlightening…

I believe all things have a purpose and a reason for happening. It’s up to each of us to look for the gold that may lie within each experience.