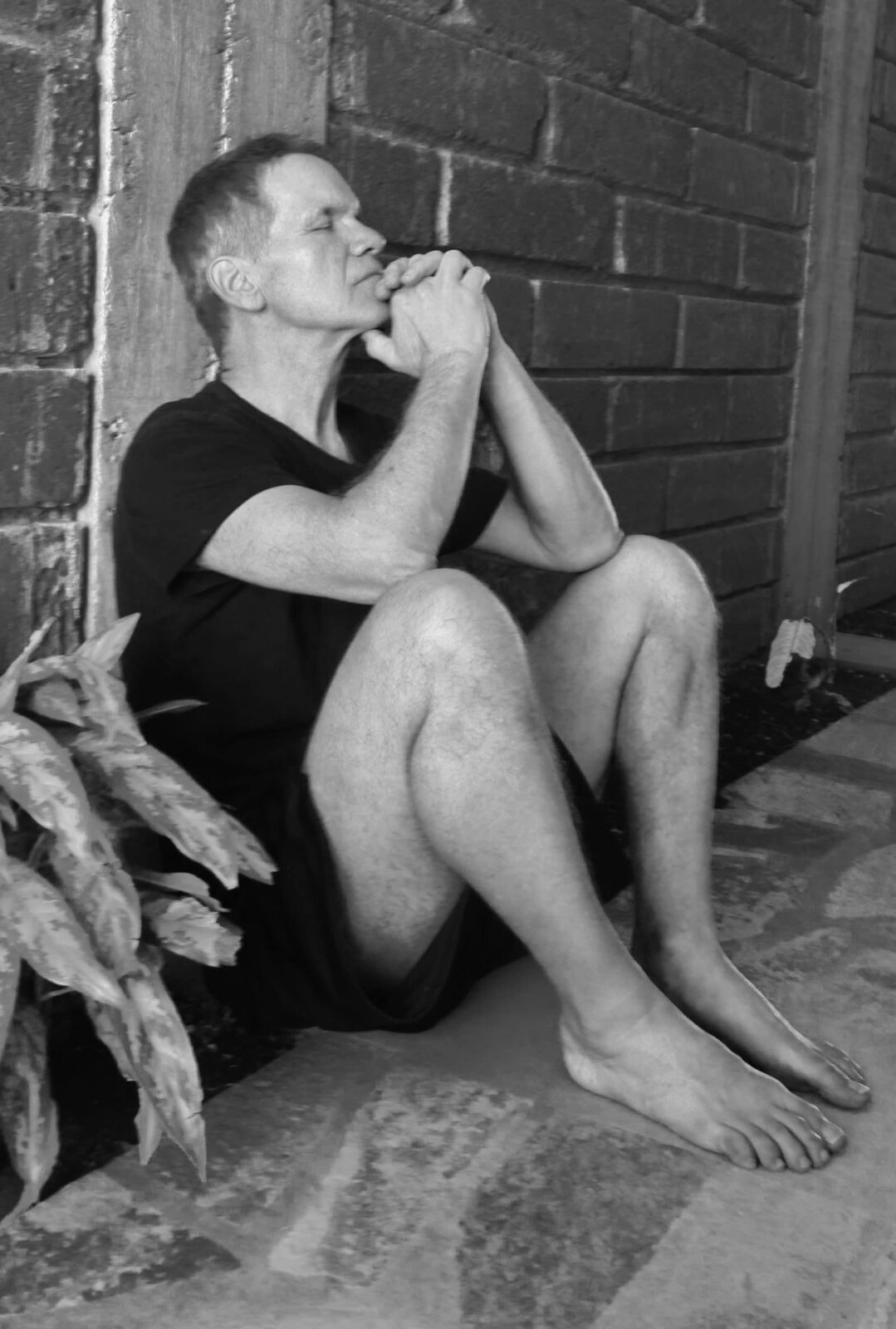 I pushed the shopping cart perpendicular to the aisles, looking for Lezlie. There was only 6 to traverse, not a particularly large grocery store to begin with. I didn’t see her. I must of missed her as she passed over to another aisle. I turned and started heading back the other way. Surely I would see her this time.

It was getting late. The sun would be setting in the next hour and we still had at least that ahead of us to drive. Our next two-week stay in Costa Rica was somewhere between Dominical and San Isidro. We knew the accommodations were very isolated, a setting surrounded by jungle, but had no idea how to get there. We were to call as we got near. We knew a four-wheel drive was required, a small but expensive item left out of the information literature we read when signing up. This fact alone added a couple hundred extra dollars to the two-week rental.

I don’t like driving at night, especially when driving somewhere new in a foreign country. I’ve death-kissed my share of deer in the past and came close to adding a horse and cow to that list. With what I’d seen along the roads thus far – pedestrians on bicycle, on foot and jogging along the roadways – I had no interest in adding something new.

It also would also be nice to wake up with something to eat in the morning. The grocery store conveniently located along the highway seemed perfect.

As I turned the cart around I saw Lezlie bee-lining towards me. I smiled and smirked asking “Where’d you go girl?’ with my expression. I quickly saw in her face a look of intent and concern.

“Glenn, come quickly, our car has been broken into.”

My smile quickly disappeared as a slew of questions flew out of my mouth .

Her mouth was moving but I couldn’t hear her words. All I wanted to do was get to the car quickly as possible. I left the cart, quickly following in her footsteps. All I heard was some gibberish about some Spanish kids coming in the store, urgently trying to speak to her, attempting to get her to follow them.

In a moment we were at the car. There was no indication the car had been broken into. No doors were pried open, no windows were smashed, no alarms were blaring. The car looked perfectly untouched.

I felt myself relax a little. It must be a false alarm. Someone else’s car … something lost in translation … overly concerned bystanders.

I remembered hesitating before heading into the grocery store, deciding whether to take my day pack and camera with me or not. I decided against it. The pack weighed a ton. Besides, the windows were darkly tinted – too dark to see any details inside, and the parking lot was small and busy – too many people around for someone to consider breaking in. Instead, I covered up the camera so it couldn’t be seen and double checked, even triple checked, the car doors on both sides.

We’d only be a few moments.

I unlocked the car and opened the back door. Everything was gone!

“This isn’t how I left it…” I thought to myself. There was stuff here. Camera. Day pack with lenses, computer, and camera gear. Passport. Cell phone. Binoculars. All gone! Wiped clean. Like I never put anything there in the first place.

I replayed back in my head the moments before leaving the car. Yes, these items were in the backseat. Where are they now? How? But there’s no indication. How did they get in? How? Why?

I was in shock. I heard sounds around me but I didn’t hear anything. There was movement all around but all I could do was stare in silence at the empty back seat. The light of day dimmed around me only allowing my eyes to focus on the vacant back seat in front of me. I stood stunned, playing back the tapes in my head over and over again. My breath became imperceptible. Time stopped as I stood there, slowly comprehending what had just happened.

Slowly, the voices became louder, the light became brighter, and consciousness returned me back to the moment. I began asking myself why … why did this happen? Why me? What lesson is in this? What am I to learn from this? What does the Universe have in store for me that involved this happening?

Today, over two weeks later, I’m still not sure.

That was a long night. No one spoke English at the police department. There were police reports to fill out and calls for help to people we’d recently met who might help us understand what was being said and asked of us. I created a list of stolen items, but had a challenging time relaying what these items were to the Spanish speaking officers. It was a memorable night, one I’d wished had never happened.

Five hours later we arrived at our destination. The consequences of the theft still hadn’t set in.

That would happen over the next few days.

The tools of my trade had been stolen from me. My Nikon D-800 professional camera along with the four lenses which covered the whole gamut of picture taking possibilities that would arise. My insurance rider would hopefully cover these items but no amount of money could replace the pictures I had on the 64GB flash card that was in the camera.

I had finally found and taken those prized pictures of the Red-Eyed Tree Frogs. They were winners …. extraordinarily good pictures. The guide who found them said they were some of the best he’d seen, and asked if he could use some in his brochure to attract more clients.

There were also the pictures I’d taken the night before at a Cirque De Soleil benefit in San Jose. The non-profit charity was for the sex trafficking trade that is so rampant in Costa Rica. Fully 30% of the tourist income in Costa Rica comes from such activities. Many of these children are sold for the night by their own families.

These rescued child victims were the featured guests of the night. Donated tickets were given to chaperones, charity founders, and other special guests that accompanied the children. I was the official photographer, and had planned to feature an article to bring awareness to the crisis. My goal was to not only raise awareness but also muster donations towards this worthy cause. Besides the pictures, I also lost the hour-long interview with the wonderful founder of the charity which was  recorded on my iPhone.

All the pictures I’d taken on this trip were backed up on my Mac Book Pro computer. I also had just created an excel spreadsheet of all my passwords for every .com I belonged to, including Paypal, my banks, Amazon account, charge card accounts, and my TD Ameritrade account. All this went with the day pack.

Furthermore, I had put my computer on sleep mode earlier that day rather than closing it down. All they had to do was plug in the charger and everything I had on my computer would be available to them without needing to enter a password.

I’ve changed all important financial passwords, but I’m still unsure if I’ve covered all the bases I ought to.

These lessons can and do apply to everyone. Crime can happen anywhere, whether it be 6 or 6,000 miles from home. The following are some precautions well worth heeding:

Don’t be a moron. Use common sense. Hindsight is always just that. No use crying over spilt milk as the saying goes. Knowing I had all my important possessions with me, I should of insisted that one of us stay in the car. My pack was too heavy to bring into the store but I should have taken my camera. Take a moment to access your situation regardless of where you are. If everything disappeared how momentous would this be? Assess, assess, assess.

Consistently back up important files to the cloud. This is a great idea in theory but not always easy to do, especially when traveling. Having a good internet connection that’s quick and efficient is difficult to find. I still haven’t figured out a way that’s quick and convenient. If you have any ideas please let me know.

Download apps that help you find your lost phone. Become familiar with the app Find My Phone and use it. Familiarize yourself with how it works. Does it work anywhere or does it need to be connected to the internet?

Record your IMEI number of your telephone. All devices have a unique identity number, known as the International Mobile Equipment Identity (IMEI) number. If your phone is stolen it then can be tracked if it’s being used online so keep a note of it somewhere safe. To find out your number, look behind the battery or dial *#06# into your phone and it will display on screen. Email it to yourself so you know where it is.

Keep a copy of your passport somewhere separate from your belongings. My passport was stolen but my travel companion had a copy with her. That made life easier when I went to the American Embassy in San Jose to replace it.

Have an insurance rider on your important and expensive belongings. Insurance companies are notorious at looking for ways to not pay for losses. Insurance riders are purchased separately from a basic policy and helps provide additional coverage at reasonable costs. Standard policies usually leave little room for modification or customization, beyond choosing deductibles and coverage amounts. Riders help policyholders meet their specific needs. As a photographer I’ve found this coverage to pay for itself time and time again.

Besides these practical lessons there’s some internal one’s as well. Losing this stuff forced me to slow down and take a deeper look at my life. It’s made me realize there’s more important things in life besides “stuff” and seeing the world through a camera lens. Besides, no one was hurt, which is the most important fact of all.

Yeah, it’s a bummer, but there’s not a darn thing I can do to change it. So the best thing I can do is to take 5 minutes to mourn and then move on. I’m safe, I’m blessed, and I’m healthy. I’m also damn lucky to be out experiencing and living life to the fullest. With so much to be thankful for, why devote any time dwelling on what can’t be changed?