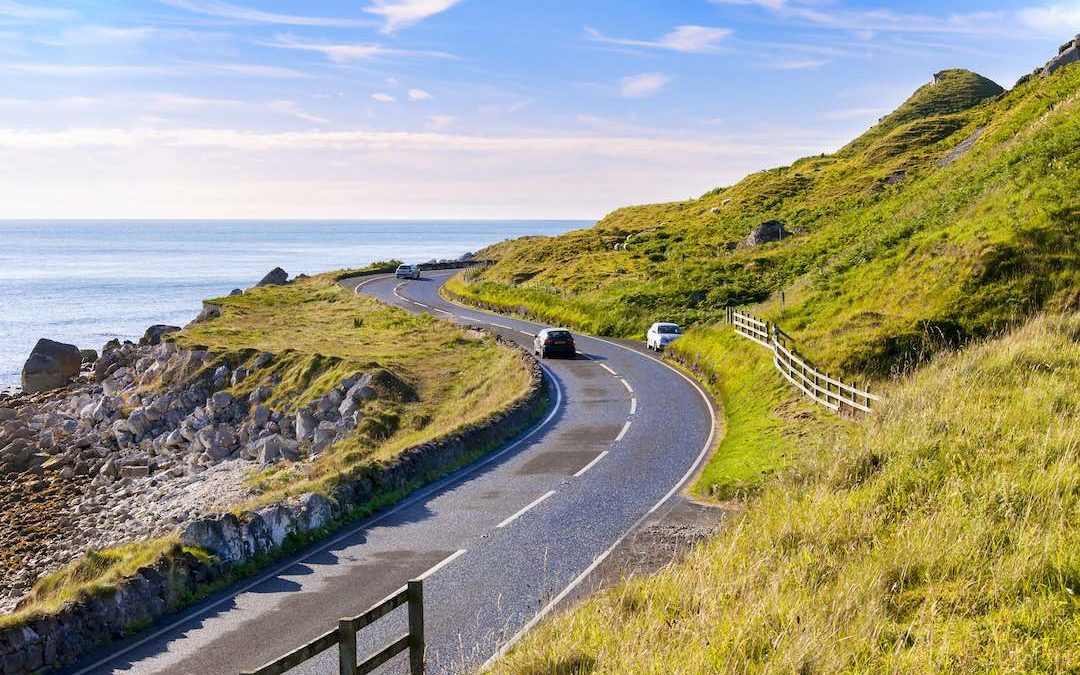 Ireland is a veritable wonderland of sights, sounds, and people. A land that is experienced to the fullest by the traveler that is willing to abandon the traditional bus tour and head out on their own in a rental car, armed with a map, a GPS, and sense of inquisitiveness. Many wonderful side trips, too small to make it on the radar of the large tours, are waiting for you to discover them when traveling Ireland by car, with the freedom to spend as much or as little time as you like, without the constraints of a tour schedule.

In the last three years, I have made two trips to Ireland to visit the land of my father’s ancestry. I was fortunate enough to connect with a travel company that assists those wanting to travel freely through the country via car. The travel agent had a list of popular points-of-interest that we were able to choose from. Then she planned an assortment of castle stays, bed and breakfasts and/or hotels accommodations around the cities and sights we wanted to visit. The fully-insured car was part of the package, as well as a large Irish breakfast each morning.

But I am getting ahead of myself. A bit of clarification first. The island of Ireland is divided into two jurisdictions: The Republic of Ireland, an independent nation which comprises five-sixths of the island, and Northern Ireland, which is part of the United Kingdom. Together, they comprise a land mass that is surprisingly only the size of Indiana. I decided to tour the Republic of Ireland in my first trip and primarily Northern Ireland in my second.

Tips When Traveling Ireland by Car 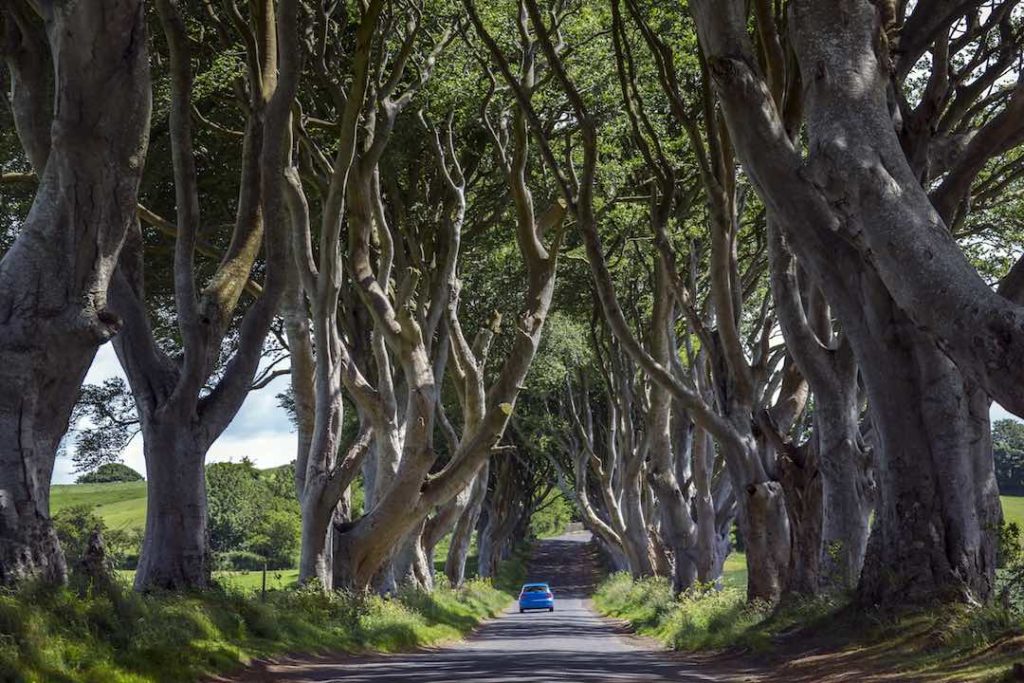 The ‘Dark Hedges’ – an avenue of ancient trees in County Antrim in Northern Ireland.

While the first trip was a wonderful and rewarding experience, the second became even better. Why? We learned the ins and outs of Ireland-by-car on our initial venture to the Republic of Ireland, and used that knowledge when planning the second trip to Northern Ireland. Here are a few points about traveling Ireland by car, to perhaps allow you to benefit from the experience I’ve gained.

On my first trip, relying just on a smartphone for guidance didn’t work in many areas. Some towns were like traveling through a deep canyon with ancient housing thick with bricks. Signals would be lost and eventually, we too were lost! While some of the resulting unplanned side trips were a great adventure, there were other planned destinations we never made it to because of being lost.

For both trips, we used the airports in Dublin and Shannon. Landing in Dublin early in the morning gave us an opportunity to spend some time exploring the city before our hotel room was ready. The sightseeing buses give you an excellent history and preview of the city, making it easier to assess what you might want to return and see. You also have the option of getting off/on the bus at designated areas around the city.

The Shannon airport, on the west side of Ireland, both times proved to be a great airport to return to the States from. It is a smaller airport and the key prize is that you can go through US customs before you board the plane, avoiding the hassle of long lines and the delays in customs once back into the US.

In addition, since Dublin is in the eastern part of Ireland and Shannon’s in the west, you save time and perhaps can cover more ground by car by not having to return to Dublin to fly out.

Keep to the Left!

As mentioned before, when you drive in Ireland you are on the left side of the road. Personally, I wasn’t concerned with driving on the highways, commonly called motorways. I actually found driving on the left was easier than our traditional right side of the road and more intuitive. I thought the cities might present a problem for me, however, I was pleasantly wrong. Yes, you do have to be aware of what is going on, but the flow of traffic helped.

The smaller roads seem like a self-directed roller coaster. They twist and turn and narrow down to single lanes, all at around 60+ kilometers per hour! There were times when even at the slowest speed, trying to navigate around an oncoming vehicle such as a bus seemed like an impossible exercise in physics! Fortunately, Irish drivers are friendly and always willing to accommodate. Truly, many of our US drivers could take lessons from the Irish on basic road courtesy.

Connor Pass is one road you need to research before traveling. It is one of the highest mountain passes in the Republic of Ireland, found in County Kerry. The views from the pass are breathtaking, but so can be the drive if you are not used to mountain driving. The road narrows to a single lane along the top of the mountain pass, increasing the challenge to the best of drivers. Fortunately for me, a lifetime of living in the Rocky Mountains taught me a thing or two about narrow mountain roads and most importantly, how to stay on them.

When Traveling by Car, Don’t Skip the Planning

On my trusted map I started by laying out the route through the cities and towns I wanted to see and breaking it up into one-day sized chunks. I picked out where our daily evening destination would be. Then I researched what sights to see along the way, making notations on the map. My love is always old ancient sites, anything historical and cathedrals, making Ireland the perfect destination. The first time you could say my eyes were bigger than my stomach. I had set impossible goals, which luckily after a couple days I modified, realizing I wasn’t going to see it all.

Places which met my criteria and were worth seeing for me in the Republic of Ireland included:

Truly for me, anywhere along what the Irish refer to as the Wild Atlantic Way is beautiful. The Ring of Kerry is another day or two trip by car that is well worth the drive. Depending on the time of year, along this route, you will find many fellow tourists as well as a good array of tour buses.

If you are a Game of Thrones fan, then Northern Ireland is for you! Many of the most famous scenes are filmed in Northern Ireland along the North Channel coast. Be prepared for much tourist activity around such places as Giant’s Causeway. The popularity of the show means many of the film sites are filled with tourists trying to walk the steps of some of their favorite characters.

Between the town of Portstewart and Londonderry along the coast sits one of my most cherished sites, the Mussenden Temple located at Downhill Palace. The 18th century temple, perched atop a 120-foot cliff, remains a stunning, haunting beauty to perhaps a forbidden love. It is said Lord Bristol in the mid-1700’s built the temple as a tribute to his “cousin”. She passed before it was complete and later it became his refuge and his library.

I will long remember three sites around Belfast:

And then there is the Food!  Great Food!

Food can be a challenge for me in the best of circumstances because of my required gluten-free diet. It was a worry for me before my initial trip as I feared I would waste too much time trying to find a place and food to eat. My worries were pointless as Ireland as a whole is very sensitive to food concerns, both allergies and preferences. There wasn’t a restaurant throughout my trips that could not both accommodate my diet and do an excellent job with food selections. One thing we learned was to split meals as the offerings come in very healthy and hardy portions.

Another tool I used to help plan restaurants either in areas we were staying in or along the route was Trip Advisor. Their easy searches made quick work of creating lists of restaurants based on food requirements or preferences. Their Highly Rated restaurants never failed to deliver! Every meal along our travel route was beyond expectations. Having a list of quality restaurants along the route we would travel each day by car saved time and made sure each meal was memorable.

Another idea you may also enjoy is asking the hotel (or castle) where you stay to provide a picnic lunch for you. Many will accommodate this request, giving you a chance to picnic out in the lovely Irish countryside.

The Footsteps of my Ancestors

It seems the older I get the more interest I have in the question, just where those ancestors came from.  My sister and I, with the help of Ancestry.com, managed to track both sides of my father’s family back to Ireland in the mid-1600’s. Records seem to indicate family members came from Northern Ireland, Londonderry and along the western coast from County Mayo to County Clare.

While the focus of my trips was not to trace back family lines, many people do. The large influx of the Irish to the US during the potato famine of the mid-1800’s resulted in many of us sharing common threads to the Irish. In both Belfast and Dublin, libraries contain genealogical records that can help you trace your ancestry. And some people opt to hire a genealogy expert and they plan their drives through Ireland around family ancestry.

In the town of Westport, I did find a wonderful restaurant called The Creel, which interestingly carried my father’s family name. However, no Creels in ownership! Rather this seafood and dessert restaurant was named for the creel, a basket fishermen carry their fish in. Still, the staff with smiles on their faces were eager to participate in my request to do a small video saying Hi to the Creels, from the Creel!

A Most Welcoming of Countries

It can be easy to forget that Ireland as a whole is two separate countries. However, the money system quickly makes this fact a reality. While the Republic of Ireland has Euros as their currency, Northern Ireland uses the Pound. If you are going to “buy” money before you leave home, make sure you have both if you are going to be crossing borders. One big challenge of the Brexit dilemma is trying to avoid the need to create “hard” border crossings between the two countries. Hopefully, it will be worked out. Today there are no customs or border guards between the countries when you travel by car.

No matter which of the Irish countries you are in, you will find the wonderful hospitality of the people in this beautiful island is constant and consistent. Be it the waterfront in Galway, the mysteries of very ancient cultures, or the end of the day with a pint of Guinness at the local pub, visiting Ireland by car will be a memorable experience. 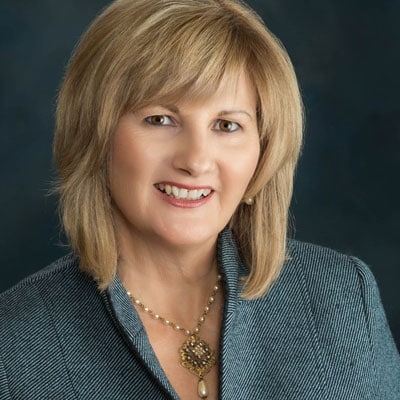