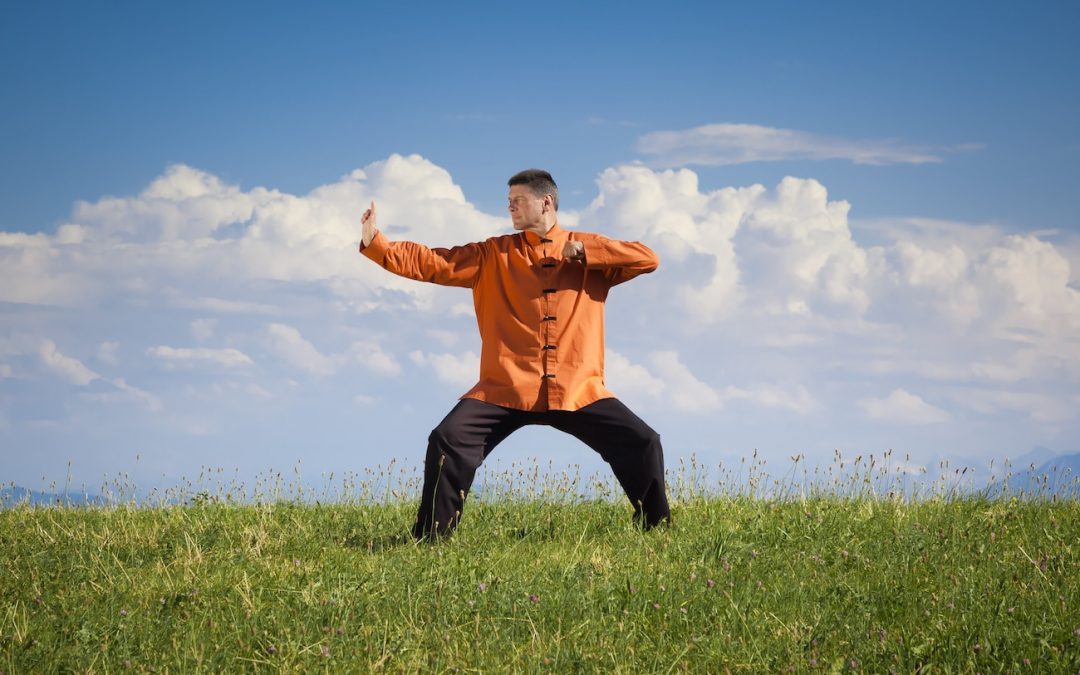 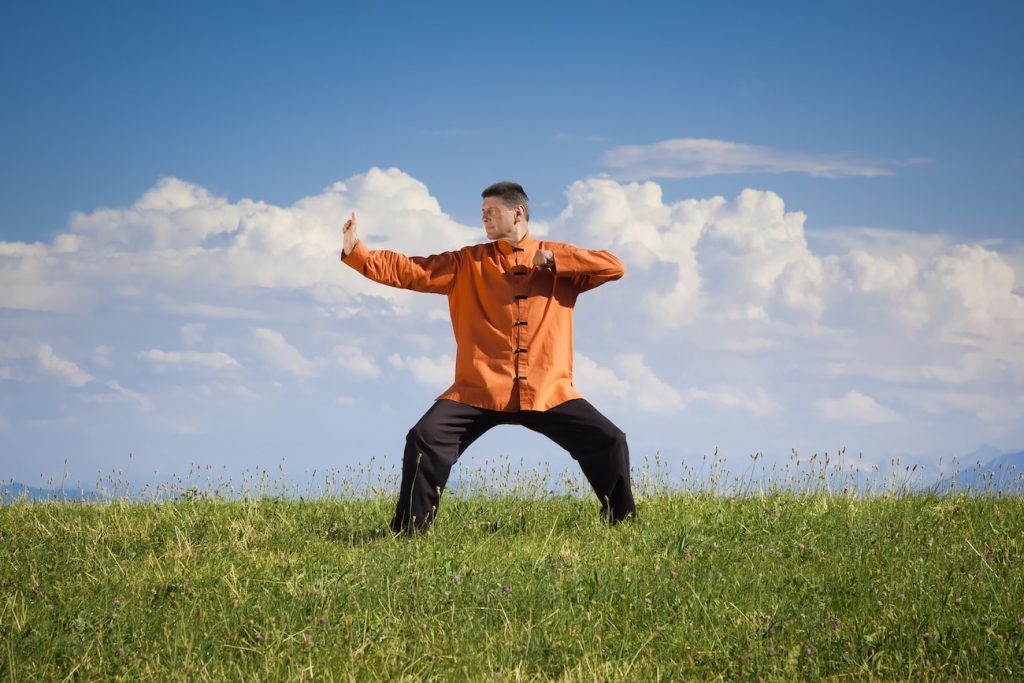 Glenn Baja here with Thrive After Fifty.  I am sitting here with Kevin Schultz.  Kevin is a fifth degree black belt and has his own company here.  Tell us, Kevin, how did you get here?

Kevin:  Glad to be here.  I started doing martial arts in 1989.  I was going to Michigan State University.  One of my friends, Andy, said come with me and take this Taekwondo Class.  I didn’t want to go.  I was probably studying and or hanging out with friends.  He broke me down I went.  Glen, I loved it.  It was fantastic.  Growing up I had some problems getting bullied.  I had moved around a lot.  I found martial arts and it sort of changed who I was.  I have never stopped since that time.  I have never stopped training.

Glenn:  How long has it taken you to get to fifth degree?

Kevin:  25 years.  I will be testing for my sixth degree next summer.  That will be my last one in the United States.  For seventh degree on I have to go to Korea.  My Master and I were actually in Korea together.  We traveled over there and haven’t been back since.  It will be great to back with him.

Glenn:  Now after you get your sixth degree belt, do you have to wait seven years to start the next?

Kevin:  I will have to wait seven years.  You wait for as many years as your belt is.

Glenn:  The reason I am here today with you is because I am representing people 50 years and older.  For those of them who have not been exercising and are not in shape, is starting Taekwondo something they would be crazy for attempting?

Kevin:  No, I think just the opposite.  People have built up inhibitions and in their mind they have a perceived idea of what martial arts is.  And uh, one of the best expressions I tell new students, especially the older ones is a Bruce Lee saying:  Empty your cup.  Basically it means, do some research on some martial art schools.  Make sure it’s reputable and clean.  And come on in with an open mind.  Try not to think of what you have seen on tv.  The benefits to my students who are generally over fifty.  Flexibility training.  As we get older our body tends to get tight.  Also, core strength.  And also, a steady gate.  One of my students her name is Sue, was referred to me by her doctor because she kept slipping and falling on ice.  Her doctor said, you should go to marital arts to learn how to fall properly.  After taking Taekwondo she started to get steadier on the ice and eventually she never fell anymore.  So she was developing a steady gate.  Working on her balance and timing.  A fourth benefit is self-defense.  We know that crimes against elderly people is on the rise.  They are seen as easy targets for home invasion or anywhere.  Any time you can learn simple moves to use when you are under pressure is always a positive thing.  Lastly, the camaraderie.  To come in with likeminded individuals and to train with them is so important.  I see most of the people who come in here, they just want to see their friends.  The YMCA did a study not too long ago, on what to do to their club to allow for people to train and want to come and want to stick with their program.  The number one key factor was whether or not they had a friend there.  So people who have friends at places, you are more likely to go.  Taekwondo is an individual pursuit.  You are not on a team necessarily.  Everyone is on their own journey, their own path.  When a new person comes in doesn’t affect the class because everyone is on their own journey.  In martial arts, we are patient with new people because we are also excited to have someone new to train with.

Glenn:  So, nobody is going to stand out or feel intimidated? 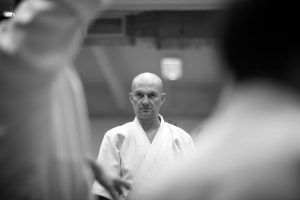 Kevin:  Good word, intimidated.  As we get older, we tend to worry more about injury, or sticking out, or looking silly and not knowing what to do.  I take care of that by doing introductory lessons on the front end.  To teach them the basics on a private level so that when they move into the class area, they feel more comfortable.  We put the newcomers towards the back for them to observe and listen.  That’s where I was 26 years ago.

Glenn:  By going at your own speed, do you avoid getting hurt?

Kevin:  When you train, injuries can happen.  Safest place in the world is at home on your couch.  Makes me say, get busy living or get busy dying.  So when you come in to train, we are pretty strict on safety.  We kick on pads, and bags.  Safety is number one for us.  We want it to be enjoyable for everyone.  I have individualized instruction for people in the class.  Not everybody is working on the same thing.

Glenn:  For testing for the next level belt, are you pressured to test?

Kevin:  The idea behind belt testing is to allow for the student to build confidence and also to measure their ability.  We belt test about every 3 months.  But I have many students who for a variety of reasons are not ready to test out.  They will ask me if it’s ok not to take the test.  I say yeah.  I don’t pressure.  I want everyone to get the skills they need to earn that green belt around your waist.

Glenn:  What kind of commitment is this?

Kevin:  Don’t start this unless you know you are going to finish it.  Martial Arts is something you have to apply yourself to for a while to get the benefits.  The benefits come back so strong.  From a financial standpoint, you could try it out for a month that’s good.  But if you want those four things we talked about earlier, make the commitment to follow through with this.  I never plan on stopping my belt testing.  I am going to keep doing it.  Especially as we get older, we tend to have less goals.  We have to do this for ourselves.

Glenn:  Personally speaking from starting this in my late fifties and now I am 63, it’s made a world of difference for me.  My energy level has increased.  I have committed to three times a week.  The stretching is so great.

Kevin:  You are a good role model for someone after 50 coming in.  Just picking it up and going after it.  It wasn’t easy.  I am proud of you.

Glenn:  So someone contemplating if they want to come in here, it can be so beneficial.

Kevin:  Its fun and there are so many positive things about it.  The more you work ou,t the more energy you get.  Dedicating two hours a week to train is nothing.  Just try something new and step out of your comfort zone.

Glenn:  Do you think there is a set amount of time for someone to do before they start to see the results?

Kevin:  There is a story about time.  A young boy who travels across Japan to find the greatest master ever.  He wants to train with him.  As he gets to the master he asks him, how long will it take me to get this?  The master said it will take 10 years.  The little boy said, what if I train as hard as I can, harder than anybody else?  Then the master said it will take you 20 years.  What if I train night and day and nothing else.  He said, it will take 30 years.  He said Master, why is it that when I say I am going to train harder, then it takes longer?  The master said, with one eye fixed on the destination, then you only have one eye left to find the path.  So the idea is don’t worry about what is ahead.  Only focus on what’s in front of you.  In this world, it is called Zen.  In the western world it is called Zone.  Zen is when you totally engage in what you are doing.  People in China will practice one form in the park their whole life.  In our society, it’s hard for us to stay engaged into one thing.  And not to worry about what is happening.  When you do that, the results come.  So don’t think about it.  You will get the gains.  You will get it on day 1.  Day 1 you will feel empowered.

Glenn: What is Tai Chi?

Kevin: The movements and the flow are less combative and less about self-defense.  It’s a great martial art.  Focus on balance and strength and timing.  For some it is a good place to start.  It’s methodical and meditative.  All martial arts are similar.

Glenn:  Kevin, it’s been great talking to you and working with you. Thanks.