Burning Man: A Virgin No More 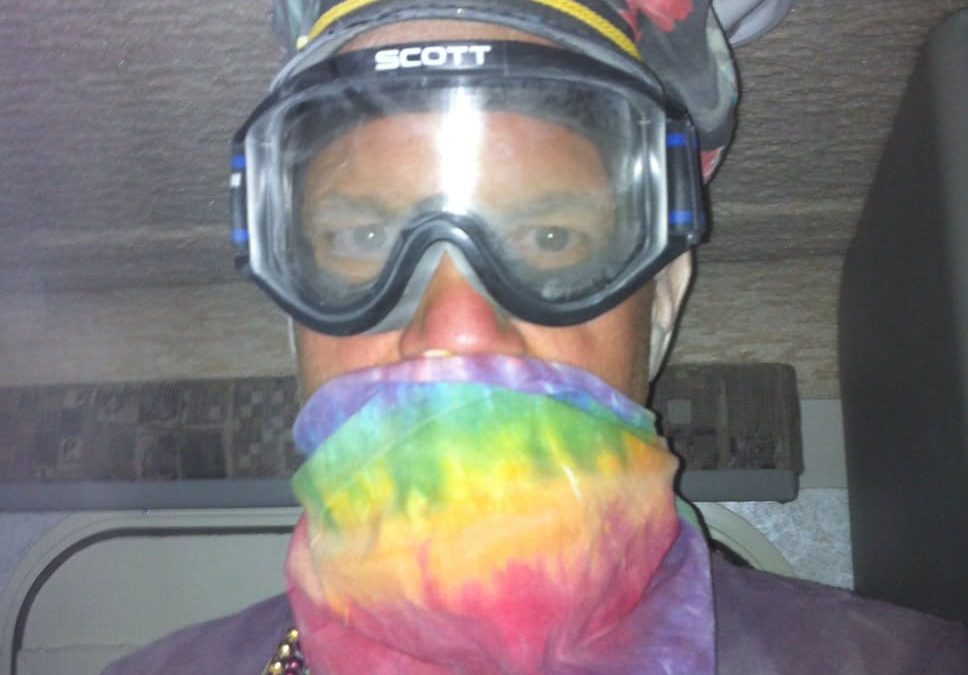 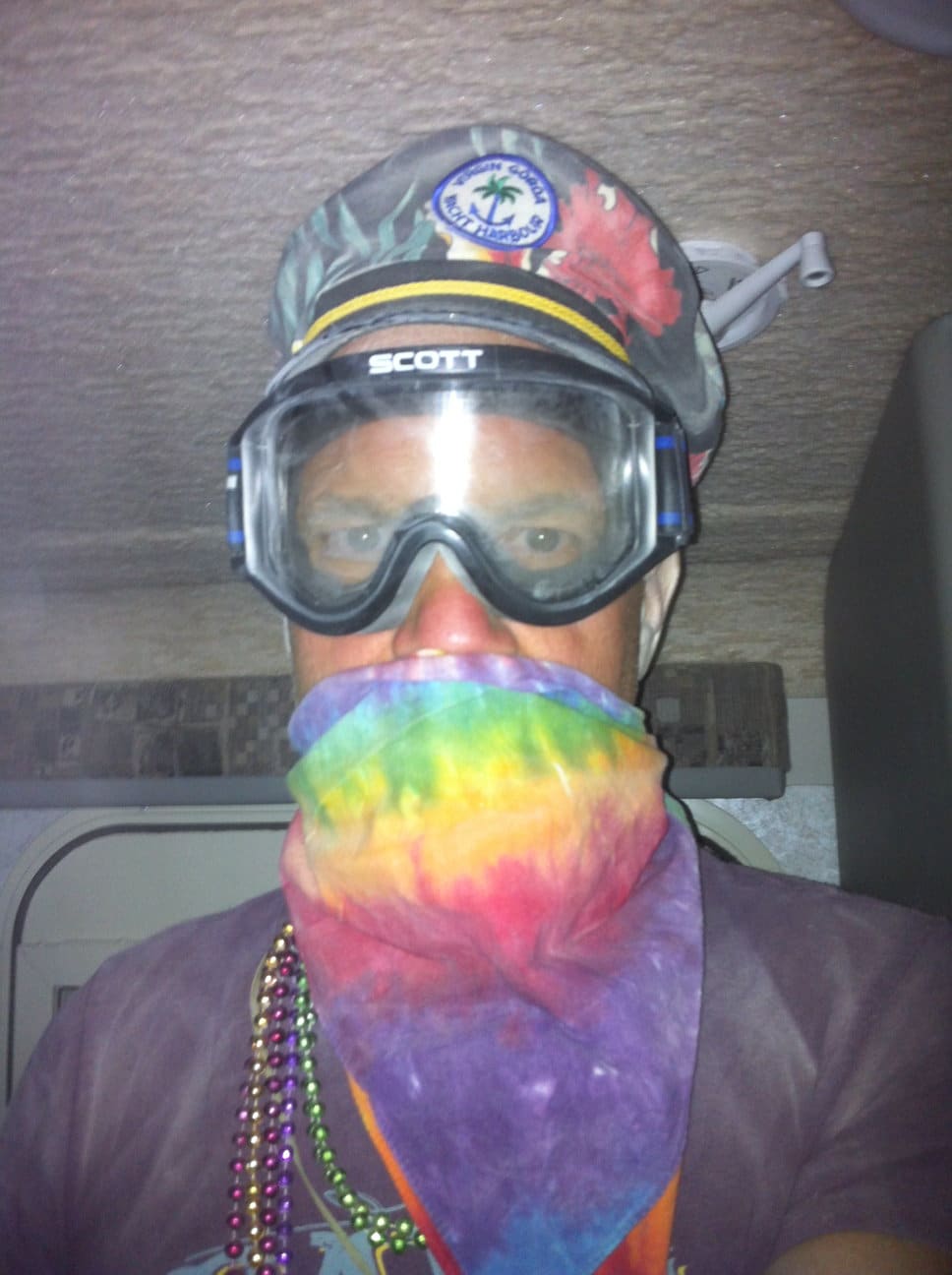 “Welcome to Burning Man. How many have you attended in the past?” the greeter asks as I reach the entrance to the event.

“This is my first” I reply.

“Are you by yourself?”

“You’re one courageous soul” she replies, and at the same time asks me to get out of the car.

Expecting a greeting hug, I get taken off to the side of the road and told to lie down in the dirt. “This is the initiation for virgins” she says. “Lie down.”

“Now, kick your arms and legs back and forth. Make a snow-angel in the sand.”

I quell my first response to resist, but do as I’m told.

“Welcome to Burning Man. This will be the cleanest you will be all week.”

It‘s nearly midnight, Sunday evening, the last day of Burning Man. I’m sitting in my dust covered collapsible camping chair, wearing my dust covered shorts, tee-shirt, crocs, and goggles, along with my neck kerchief draped across my nose and mouth.  Todd, my “next door” camping neighbor from Regina, Saskatchewan, and I are staring in the distance at the throngs of cars and campers leaving the festival after 8 days of camping. The last building, the Temple, a sacred place of prayer, meditation and tribute to personal loss and pain, had been burned to the ground only one hour earlier. Many had passed on attending the ritual in favor of beating the traffic jam that was sure to occur.

The Burning Man broadcast was saying there was already a 6-8 hour wait to get out and suggested waiting until 3am to depart. It didn’t help that they were also saying that rain would be coming the following afternoon and, if it did, a “lock-down” on the city would happen; no one would be allowed to drive anywhere due to the mud that would be formed on the terrain we were camping on.

Many of the 70,000 attendees are wanting to beat the Labor Day traffic that starts tomorrow. Red tail-lights extend as far as the eye can see. Temporarily constructed overhead street lights illuminate the stream of cars below. Occasionally, all I see disappears as the winds gust and lift the dirt and dust of the Black Rock Desert of Nevada into the air, propelling it in our direction. Moments away from impact, it’s like watching a swarm of insects approaching- swirling, dancing, gaining speed, and building to a crescendo of oncoming agony.

I prepare myself for the onslaught. There is no stopping it. There’s nowhere to go to escape, no possible way to avoid its effects. It finds you where ever you go- inside, outside… it doesn’t matter. Everything I own is covered in this dust; my clothes, camera equipment, interior of the van, my pillow… it’s lodged in my hair, crusted on my shoes, baked on my skin. It’s like camping in dry wall dust, it permeates everything.

Personally, this past week has been the most challenging camping and living conditions I’ve ever experienced in my life, and I’ve experienced quite a few. I’ve camped in extremely cold winter temperatures in Upper Michigan, in the mosquito-infested wilds of Alaska, in flash floods of South Dakota, and been bitten all night by hundreds of no-see-ums on the Appalachian Trail in Maine, but this takes the cake, with no comparison. Eight days of it!

The doors to Burning Man opened at 6pm on Sunday, August 24th. I arrived, after 2 ½ days of driving from Michigan to Reno, Nevada, at 10:30 pm, ready to complete the last 75 miles as quickly as possible. I expected delays, with 70,000 people expected to attend, but suspected that my arrival time might work to my benefit since it was closing in on midnight. Approximately 50 miles out from the gate, the traffic suddenly came to a complete halt. No one was moving an inch. It wasn’t until one hour later that we moved approximately 10 miles forward before the same thing happened again, and again, and again. I chatted and had a beer with the two fellows from Switzerland in the car ahead, their first visit ever to the US, until the chill of the midnight air drove us into our cars. More than once I dozed off only to be awakened by hollering voices and loud horns of those behind me.

Hours later we finally left the road and entered Gate Road, the final 4-5 miles before the actual entry point to the event. Here, the lanes of entry multiplied to about 20, all heading the same direction, and all moving at the snails pace of about 30 feet at a time. It was a struggle to stay awake. I never expected to be up all night.

The desert floor valley was flat, like the Bonnyville Salt Flats of Utah, but rather than salt, it was a fine clay. Temperatures were expected to reach 100 degrees, so rather than nap, I resisted the urge and set up camp.  I positioned my vehicle to block the prevailing westerly winds and set up my shade structure, a screened four-sided unit that I had used in the past over a picnic table to keep insects out. This week, insects were not going to be a problem; sun and shade were.

I drove 12 inch re-rod stakes into the ground to hold the tent in place and unzipped the 2 screens opposite one another to lower wind resistance. Gusts of 70 mile per hour winds were not uncommon according to what I had read. I didn’t want to be chasing my tent across the desert floor.

After setting up, I quickly decorated my bike to personalize it from the thousands of others as this would soon become the primary means of transportation. Blue and red lights, pink handle bar tape, colorful shoe strings, and lastly, a luggage ID tag with my personal identification and camping location. It’s important to distinguish your bike from others, primarily so you can find it quickly amidst the masses, but also to discourage any well-intended “borrowing” of said bike by those who may not have distinguished their own with unique decor and been easily confused…

I finally laid down to rest in my camper and dozed off only to awaken a few hours later drenched in sweat. Lesson number one: do whatever you need to do to avoid the heat between the hours of 12 and 3pm. It gets miserably hot.

Upon arriving, every person gets a 160 page “What Where When Cargo Cult Book” that lists repeating events and one-time events throughout the week. Each page has about 10 events on it, roughly equating to 1600 events one can choose to participate in throughout the 8 days. Activities vary considerably. Practically anything you can think of is included. However, it’s what you would never think about that was particularly interesting. If so inclined you could attend ‘How Mushrooms Can Save The World’, or the ‘8th Annual Antarctica Happy Hour’, or attend the ‘All Famous Lost Penguin Blues Jam’- in fact, you could attend a ‘Lessons in Couples Bondage’ course immediately followed by an event titled ‘Skyping with Grandma’ if you were in fact that curious and adventurous. If that didn’t float your boat there was the Stinky PEE Party, complete with pickled asparagus for participants. So, yeah, eclectic to say the least.

Traditional events such as a 5K run, yoga, medicine dancing, and Twister were also available, clothing being optional in most situations. More than once I passed camps where naked rears were reaching and stretching for the sky, only a few feet from the person behind them. Suffice to say, I quickly gathered I was in for a week unlike any I had every experienced. So, I braced myself. Slipping my goggles snuggly in place, adjusting my kerchief against the raging dust blooms, glancing now with familiarity vs. shock at the nudity, extreme costumes, and displays of expression totally unique to this environment, I braced myself for the week ahead, understanding now that anything, and clearly everything, was possible…